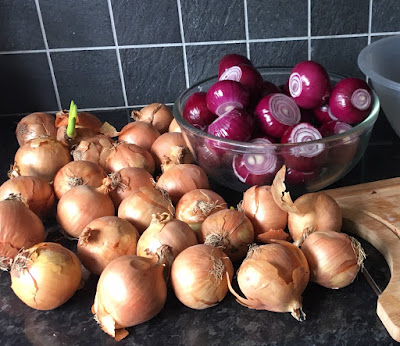 One day, I decided to caramelise not one onion but two, and divide them between a soup I was making and a casserole I was preparing for later. Another day I sliced up eight onions and had my daughter help to fry them while I prepared other parts of the meal. The onion-caramelising idea escalated and soon bulk-preparing onions became A Thing. So much of a thing, in fact, that when my husband was given a huge box full of onions, I decided to tackle the lot. How do you like to spend your weekends?! 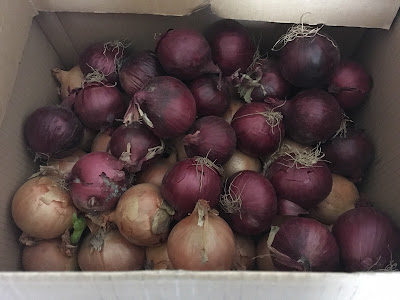 On Sunday morning, I decided to do the ultimate onion preparation process. I highly recommend this (though not necessarily on such a crazy scale) for speeding up your weekday meal-making.

Instead of 'caramelise an onion' taking 15-20 minutes, imagine if it was just a matter of taking a chunk of ready caramelised onion out of the freezer and adding it to the pot? That is what I was aiming for.

So, on whatever scale you decide to do this (even two onions would be one for today and one for tomorrow's meal), here's the bulk-advance-prep onion method in action. 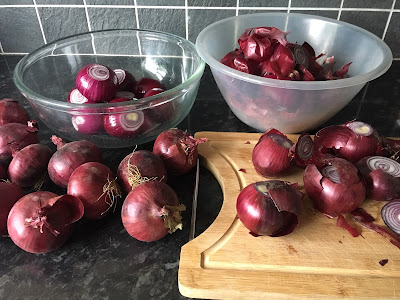 I decided to do the red onions first. Top and tail, then peel. Wear sunglasses to reduce the tears, it really helps!

This lot took me about 25 minutes to process. 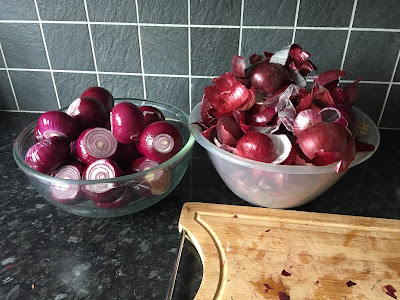 Then I did the white onions. 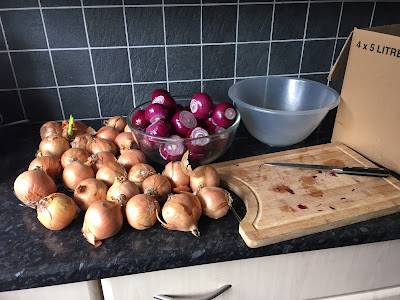 Before long, I had two bowls full of peeled onions. 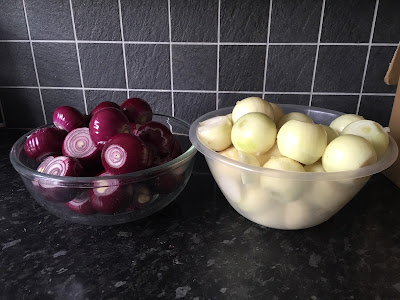 Next the speedy bit. Out came the food processor, or 'Bish Bash Bosch' as I like to call it, since it does everything so fast. 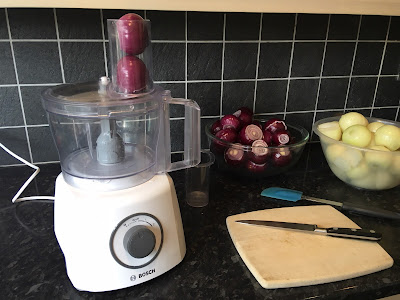 That made short work of the chopping. 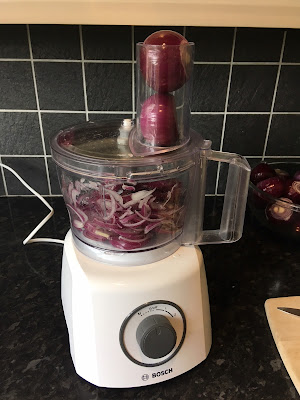 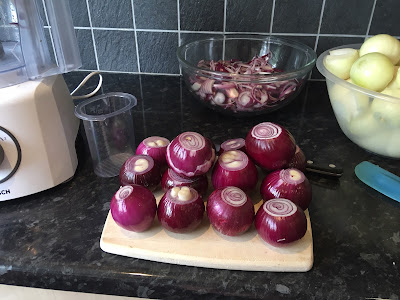 Meanwhile, I heated up some vegetable oil in a large non-stick frying pan. 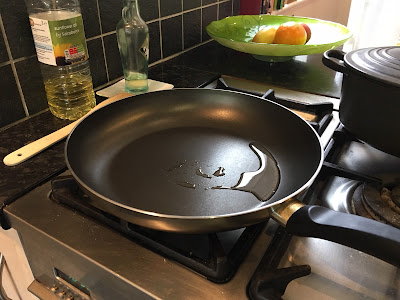 I found I was able to slice about 8 onions at a time, before I had to empty the food processor. Soon I had piles of thinly sliced onion, ready to cook. 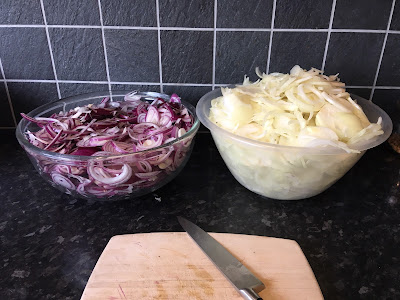 Some of the onions went into the pan, to fry. 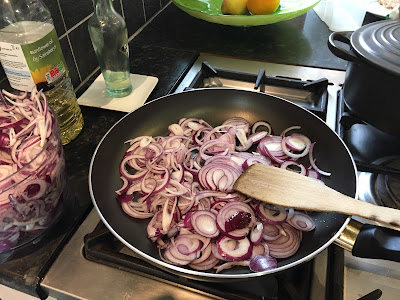 It's important not to over-fill the pan, otherwise the onions will steam, rather than fry and caramelise.

I tried to let the onions brown without burning until they were golden and translucent. 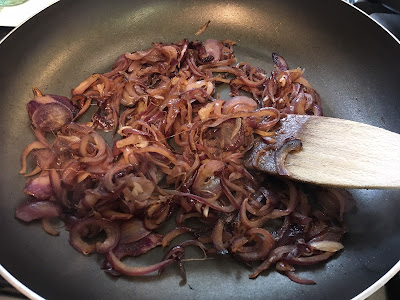 To freeze them in useful portions, I put them into muffin/Yorkshire pudding trays. 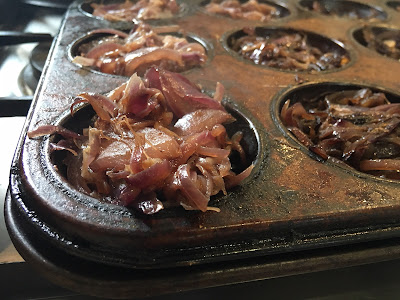 Over the course of the morning, I fried up several pan-fulls of red onions and several more of white. 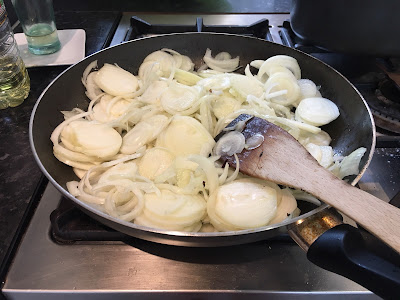 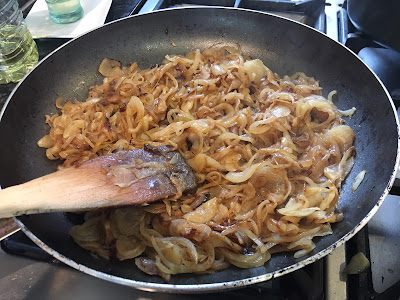 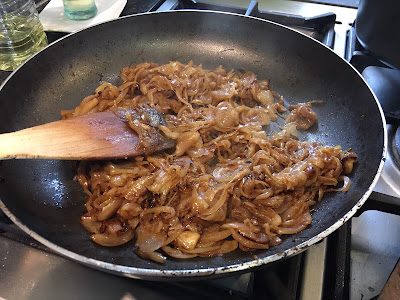 (There was a break in proceedings for lunch, when the pan was hijacked to fry croutons). 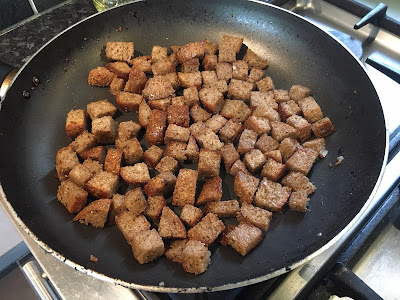 When I ran out of muffin trays, I portioned out the onions on baking sheets, covered with silicone liners. The liners make it easier to get the onions off the tray, once frozen, but they aren't essential. As with the muffin tins, you can warm the undersides with water to release the frozen chunks of onion. 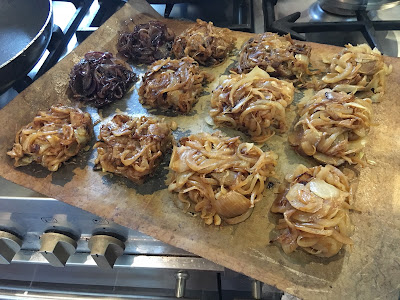 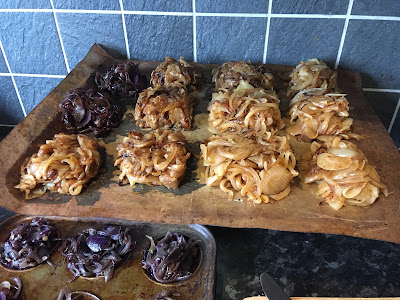 I even spread some on baking parchment, in a casserole dish, to open-freeze. These onions will crumble loosely into a bag later, from which I can take handfuls (as opposed to chunks) to add to recipes in future. I like the chunks because they are easy to work with but open/loose freezing will work fine too. 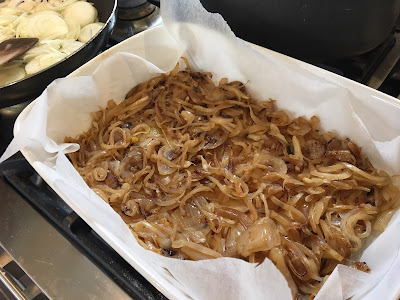 So, you know, I spent my morning smelling of fried onions and trying to make brown onions on brown trays look photogenic. Didn't work. 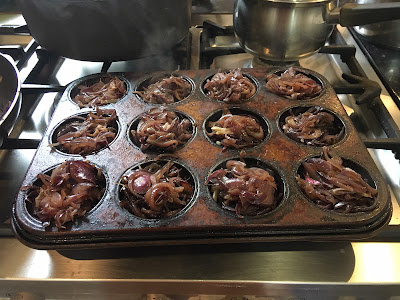 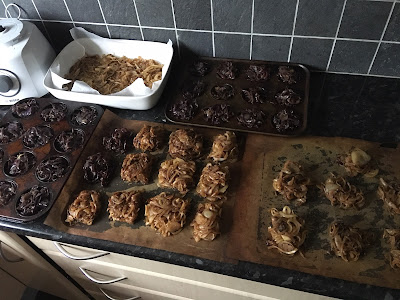 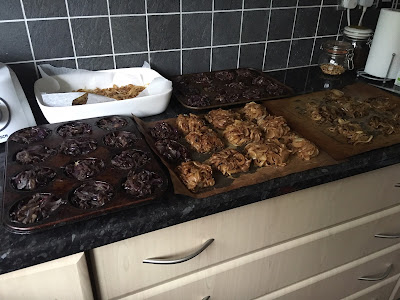 But, I do have loads and loads of onion portions ready for that all-important recipe step. 'Caramelise an onion...' 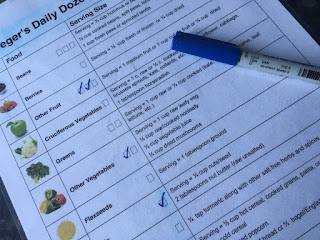 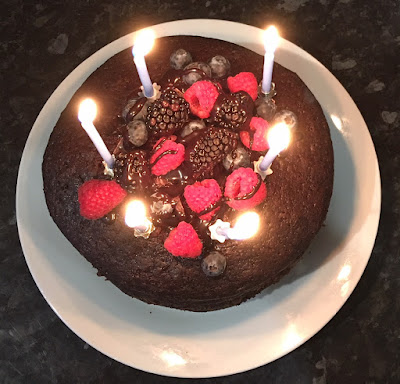 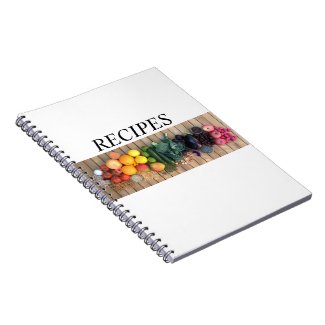 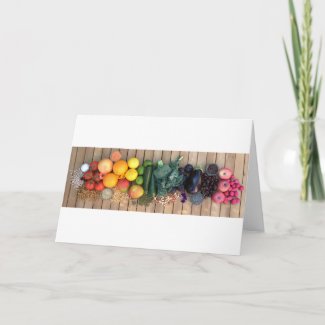